Our theme this week is

What comes to mind with this word?
Love it or hate it, this is a word which is part of modern living...
we couldn't live without it these days although sometimes it's very hard to live with it!

So what can you come up with?
Give your imagination free rein! 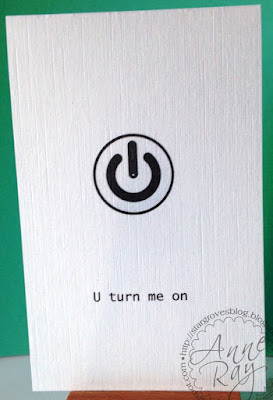 I have a computer generated one layer card for this week's challenge.
I saw something extremely similar on Pinterest, found an on/off button image online and
added the sentiment in problem secretary font. The card is linen textured, tent folded. 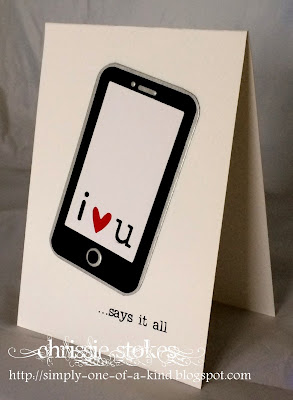 I was at a bit of a loss for a while and decided to see if I could make a representation
of a mobile phone, with the bits and bobs I had around me!
I started by cutting a couple of rectangles from black and dull silver card,
rounding the corners with graduated sized Corner Chompers...3/8" for the silver
and 1/4" for the black. Next I cut a rectangle with a Spellbinder rectangle die,
shortening it slightly to fit in the space. For the button I used a flower centre die
and a hole punch, fitting the smaller black circle onto the silver piece.
The microphone at the top was made with the letter i from a Cuttlebug's Babyface alphabet.
The message is also from little alpha die-cuts and the sentiment is computer generated!
Job done! 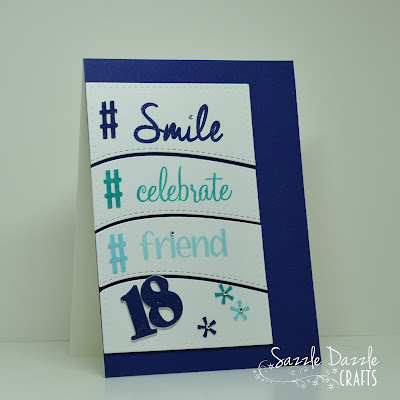 I have to admit this was a mega struggle but in the end I decided to go with 'tech' speak!
Down with the young'uns using 'hash-tags'!
Mama Elephant Landscape Trio dies and Index Card set came in handy especially
as the latter includes a # die! After die-cutting the stitched rectangle I split the panel into 4
using a snow-drift border die. I inked up some cardstock using the same inks as the sentiments
to die-cut 3 hash-tags. The sentiments are from Uniko - All Occasion Sentiments
with 'smile' and 'celebrate' from the brand new set being released today.
The '18' is die-cut using Avery Elle - Count on Us dies and is die-cut 3 times
for added dimension. To finish a few sparkly gems 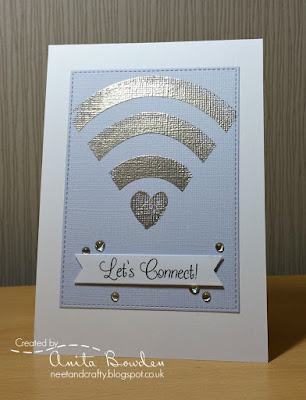 I masked off the V shape with post-its and the curves of the logo were created using one
of the straight stripe stamps from Clearly Besotted's 'Basic Stripes' set which I
manipulated into a curve.  The three curves were embossed in Wow! Platinum EP.
Instead of the usual dot at the bottom I changed this for a heart from Stampin' Up's
'Work of Art' set and this was also heat embossed.  The coloured cardstock was cut with
a stitched rectangle and a computer generated sentiment added, cut with a tag die from
Clearly Besotted's 'Tag Along' set.  A few glazed gems were added to accent.

We hope you enjoy the challenge and can't wait to see the results of
technology ideas. Have fun and don't forget to keep your creations clean and simple!

An InLinkz Link-up
Posted by Chrissie at 17:00
Email ThisBlogThis!Share to TwitterShare to FacebookShare to Pinterest
Labels: Theme, Week 241-250